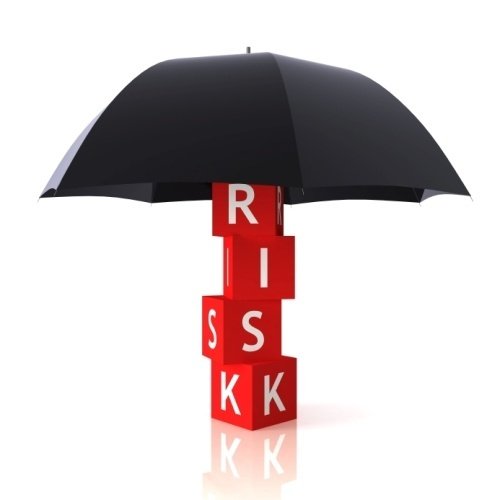 One day the young trading apprentice approached his master and looked defeated.

“Master, I understand that losses are part of my life as a trader. But I’m getting sick and tired of losing. I wish there was a way to trade WITHOUT risk.”

The old Trading Master smiled. He has heard this wish many times before and replied: “Whenever you want to make substantial amounts of money, there’s risk involved. However, there is a way to trade that allows you to extract small, but consistent profits out of the market with virtually no risk.”

The young trading apprentice was surprised: “You mean that there IS a way to trade with no risk?”

The Trading Master answered: “There is a way to trade inefficiencies in the markets, which only occur a few times a day. You have to patiently wait for these opportunities, but when they arise and you take advantage of them, you can squeeze some money out of the market with very limited risk. It’s called arbitrage trading.”

The young apprentice was skeptical. He has heard about “arbitrage trading”, but he thought that this kind of trading was only for “high frequency traders”, or the “big guys” with millions of dollars.

“Arbitrage Trading has been around forever. And it is still possible to use this method today, even though computerized trading has taken away many arbitrage opportunities.” explained the Trading Master.

The apprentice asked: “Master, as you know I have a rather small account. And I just have a normal computer with a normal internet connection. Is it actually possible for ME to trade this way?”

“These days there are TWO arbitrage opportunities for retail traders with small accounts like you”, he explained.

“The first arbitrage opportunity exist in the futures market. As you know, futures contracts have an expiration date. As an example, the e-mini S&P futures contract expires in March, June, September and December. In fact, most futures contracts expire quarterly, and often only the current contract month is liquid enough to trade.”

“However, Crude Oil (CL) has a monthly expiration, and both the current month as well as the contract that expires next month is liquid enough to trade.”

“I understand,” interrupted the young trading apprentice, “but what does THIS have to do with arbitrage trading?”

“Patience!” said the trading Master sharply, “By now you should know that traders are patient traders, don’t you?” 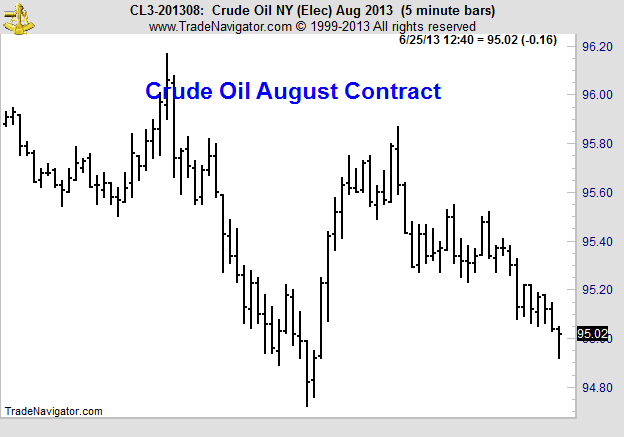 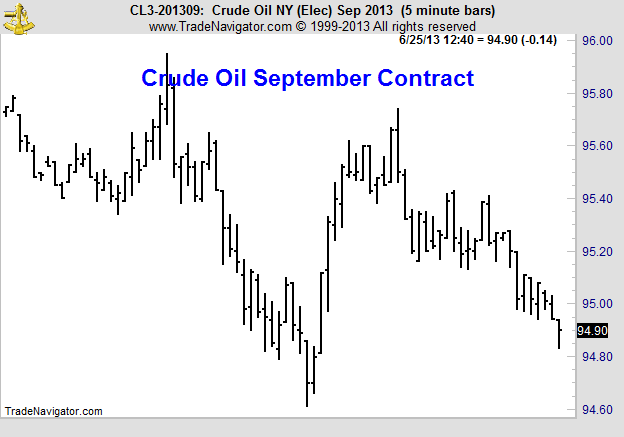 “They look exactly the same”, said the trading apprentice.

“Almost,” said the Trading Master smiling, “but there is a small – almost UN-noticeable difference. Take a look at this chart, which shows the difference between the prices of the two contracts.” 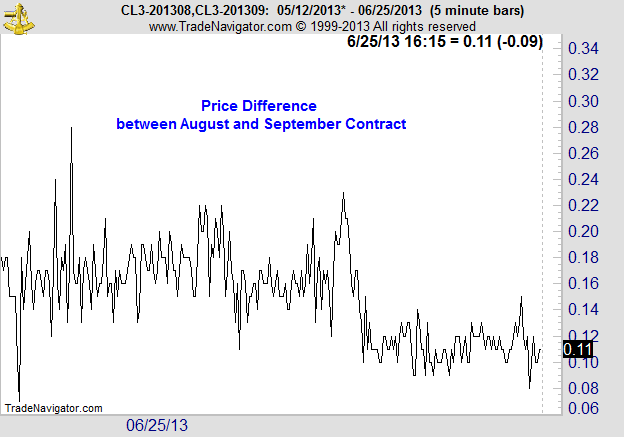 “What else do you see?”, asked the Trading Master.

“It seems that the price difference oscillates. It doesn’t seem to trend.” observed the trading apprentice.

And then it dawned on the young trading apprentice: “You mean that you can trade any of these spikes and then just wait until prices go back to the mean?”

“That is fantastic! But how exactly do you do that? When do you buy? When do you sell?” the apprentice asked.

The Master responded with a question: “What do YOU think is an easy way to trade a range?”

The young apprentice knew that the Master liked Bollinger Bands to determined a trend and also a trading range, so without saying a word he plotted Bollinger Bands on the chart with the difference of the two contracts. He adjusted the settings to 12 for the moving average and 2 for the standard deviation, just as the Master has taught it to him. 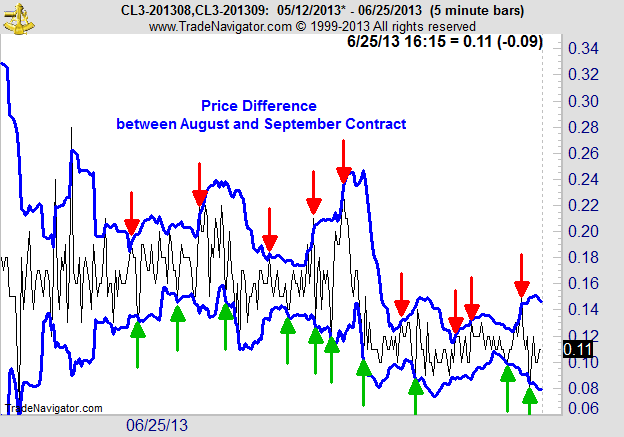 Whenever the prices touched the Upper or Lower Bollinger Band, the trading apprentice drew an arrow. He got very excited.

“There are several trading opportunities where I could simply SELL at the Upper Bollinger Band, and BUY at the Lower Bollinger Band!” – he said excited. “But this chart shows a difference between two contracts. So how would I BUY and SELL a difference?”

“And if I wanted to SELL the difference, I would simply do the opposite, i.e. SELLING the Crude Oil August contract and BUYING the Crude Oil September contract?” asked the trading apprentice.

“This sounds too good to be true! I’m sure there’s a catch…?” asked the trading apprentice.

“Well, there are a few things you need to know about arbitrage trading” – explained the Master.

“First, as you can see on the chart, you have to patiently wait for your trading opportunity.”

“Secondly, you need to make sure that you can make enough money to pay for your commissions and possible slippage. Keep in mind that you are paying twice the commissions you usually pay, since you are trading TWO contracts. Therefore you should only trade an opportunity if you can make at least $60 per contract, i.e. you’re trying to catch a move of $0.06.”

“Third, you need to be quick. If you snooze, you lose and the trading opportunity is gone. You have to watch the market like a hawk, and be quick to place the orders.”

“I think so. But I will first try this arbitrage trading strategy on a simulated account to ensure I can execute it and make money.” – promised the apprentice.

The Master nodded and smiled. He knew that the young apprentice was eager to practice this arbitrage day trading strategy. He could see the excitement in the apprentice’s eyes.

“One more question before I start” – said the apprentice. “Is this the only way to do arbitrage trading in today’s markets?”

The Master responded: “No, there are several other opportunities. One of the arbitrage trading strategies that I like takes advantage of the inefficiencies between the Spot Forex Market, and the Futures FX contracts.”

“We’ll talk about this arbitrage trading strategy another day.” said the Master. “Now go and apply what you have learned today. And make me proud by making lots of money!”

The young apprentice thanked the Master and started practicing arbitrage trading. He was excited, because it seemed that THIS was a way to trade and make consistent profits with very limited risk.

Should I teach trading strategies the “conventional way”
or do you like the idea of the Trading Master and the Trading Apprentice?

Leave a comment and let me know what you prefer.

And let me know if you have any questions around the
arbitrage trading strategy.

What’s The Best Trading Computer? A Desktop Or A Laptop?

What’s The Best Trading Computer? A Desktop Or A Laptop?

Common Trading Mistakes And How To Avoid Them

Common Trading Mistakes And How To Avoid Them

Should You Start Trading Binary Options?

Should You Start Trading Binary Options?

5 Ways To Improve Your Trading NOW

5 Ways To Improve Your Trading NOW

Hi, I'm Markus Heitkoetter. I'm determined to create profitable traders. The question is, will you be one of them? I've put together a trading plan template & short training where I'll walk you through building a "bulletproof" trading plan:

Check Out The Podcast